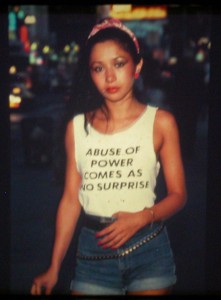 THIS BEGINS AT 17H

Reflecting on renewed claims to the revolutionary potential of participatory art and anti-hierarchical strategies in the art context (“Forget Fear,” the 2012 Berlin Biennale), artists Amy Patton and Mathilde ter Heijne will be leading a discussion on the legitimacy of art as an actual agent for social change.

With previous models showing ideas of collectivity, gift economies, the exchange of aesthetic and social experiences, encouraging dialogue and inhabiting spaces that are non-traditional for art, how

and why do participatory art forms claim to break down hierarchical structures, and could we say these strategies are successful? Is the abuse of power inevitable in any hierarchical situation, and if so, how could its “losers” embrace failure as a tactic? In what ways could failure offer new, more effective models of knowledge production, different aesthetic standards for ordering or disordering space, and other modes of aesthetic and political engagement?Amy Patton, artist and filmmaker, lives and works in Berlin. She completed studies at the Universität der Künste Berlin and The University of Texas at Austin. Recent solo exhibitions and projects include Bard Center for Curatorial Studies, New York (2009) and the Blaffer Art Museum, Houston (2010); other group shows and screenings have been held at Magazin 4, Bregenz, and Brandenburger Kunstverein, Potsdam (2010); Sculpture Center, New York (2009); Contemporary Image Collective (CIC), Cairo (2008); Museum Ludwig, Cologne (2007); PIEROGI Brooklyn / Leipzig (2006).Mathilde ter Heijne, visual artist, lived for many years in Berlin. She studied in Maastricht at the Stadsacademie and in Amsterdam at the Rijksacademie Beeldende Kunsten. Since April 2011 she is professor of visual art, performance and installation art at the University of Kassel.
She has participated in numerous national and international group and soloexhibitions including Migros Museum for Contemporary Art in Zurich, at the Goetz Collection in Munich, in the Berlinische Galerie in Berlin, the Künsthalle in Nuremberg, Lentos Museum of Modern Art in Linz (all solo shows), and Stedelijk Museum in Amsterdam, PS1 in New York, Hamburger Bahnhof in Berlin or at the Shanghai Biennale .

ƒƒ is a living and evolving network of artists. ƒƒ is a way of working and communicating through art that grows out of collaborations and discussions in close personal contact. Through friendships and alliances we make art that is an essential element of our lives. Art is a field in which we move and meet, while creating and transforming it. We are different, having each our own language and history. Our heterogeneity is our strength. Feminism for us means equality for all: human beings of all genders and all origins.